A Busy Day at Magic Kingdom

Posted on February 2, 2018 by learninggodsway

Yesterday we tackled Magic Kingdom. It is clearly the park to go to if you have younger kids. It is very over the top and fun for them. I really like it a lot myself. However, it is always very very very crowded even in the off season. The crowd predictors have been way off on the crowd levels this year. Yesterday the crowd was predicted to be at a 3, and it actually came out to a 6 out of 10.

We still managed to have an awesome time. After meeting talking Mickey, Tomorrowland was where we started off our day. 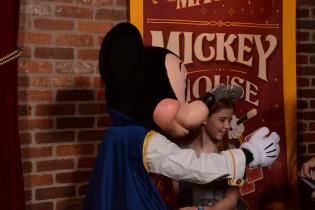 The older kids loved Space Mountain. They would have ridden it all day if the lines hadn’t been so long. The Buzz Lightyear ride was a hit, too. 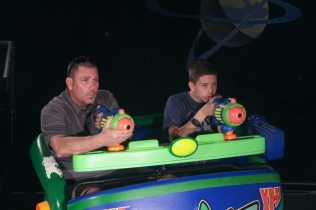 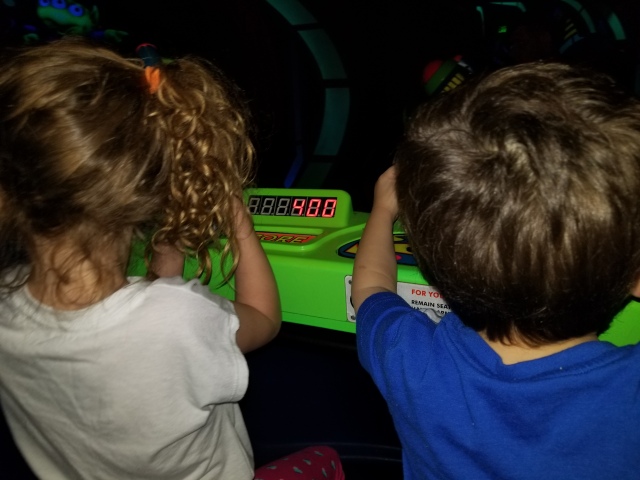 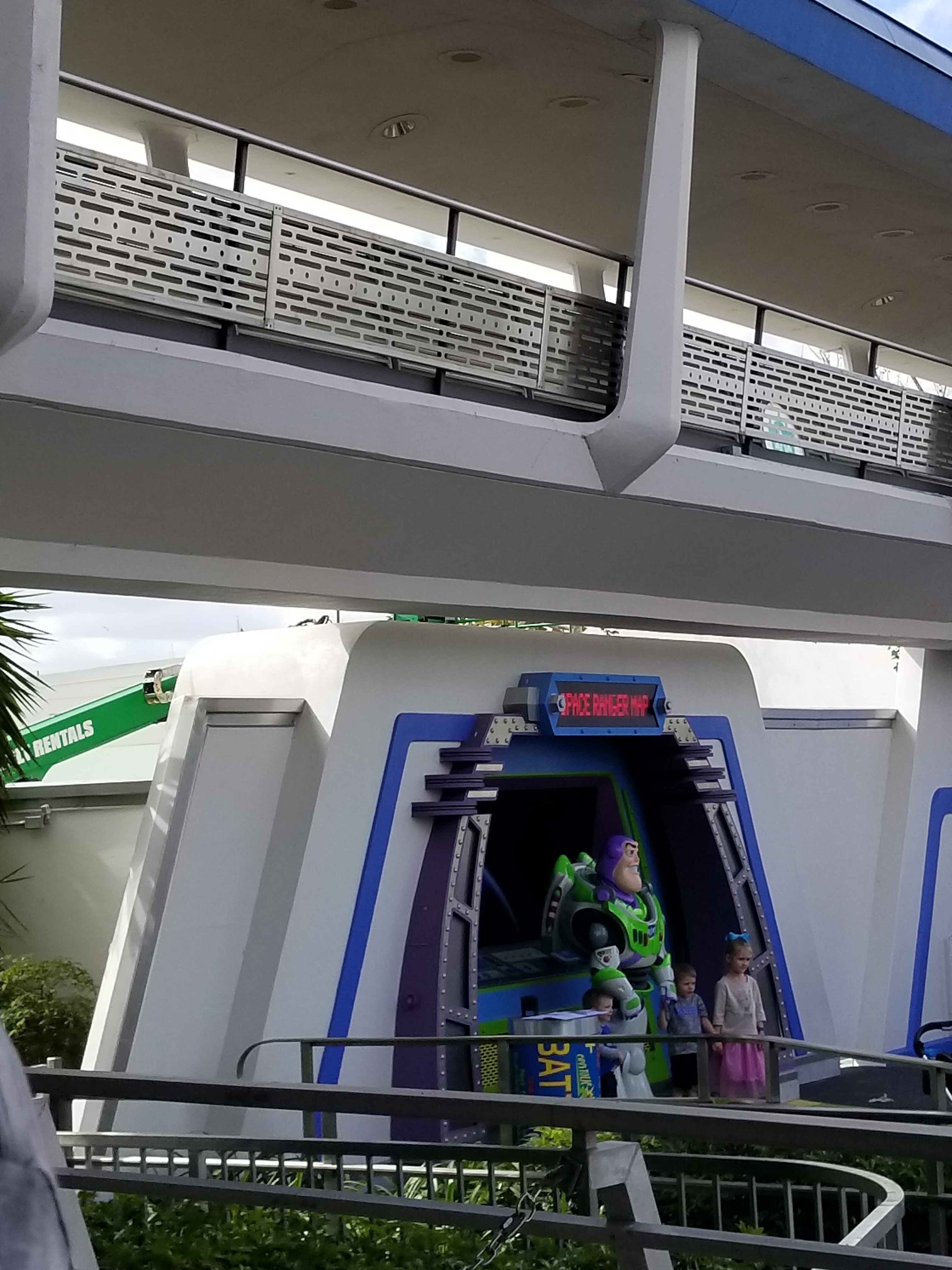 After we finished all the rides in Tomorrowland, we headed to watch the parade. We had read several Disney stories or watched the movies before we came. The parade helped the stories come to life for them. 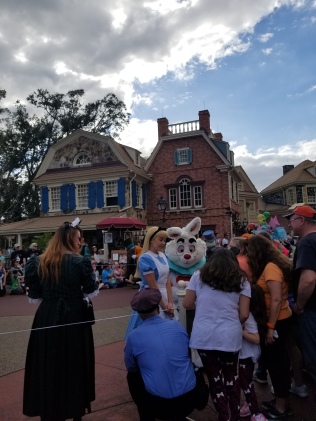 Alice’s Adventures in Wonderland was a chapter book that we read together during the month of January. Alice has became one of their favorite characters.

We all watched Dumbo a few days before we left for our trip. It is one of my favorite childhood movies. We didn’t have a chance to ride the Dumbo ride, so I’m glad they got to see his float in the parade.

All of the floats are over the top and nicely done. We were glad we took time to watch the parade. All the kids enjoyed it. 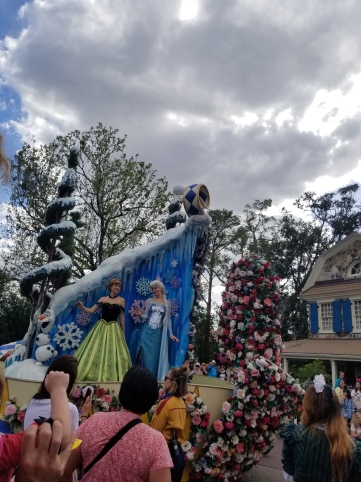 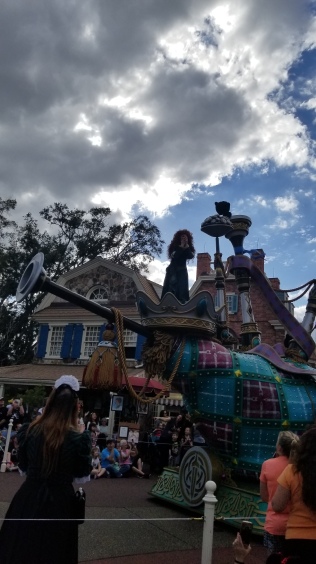 After the parade, we met Cinderella and Elena. Jayla had just fallen asleep while we were in line, so it wasn’t the best time to get to meet them. She would have rather taken a nap. But, she tried really hard to smile. She got to finish her nap right after the pictures were snapped. 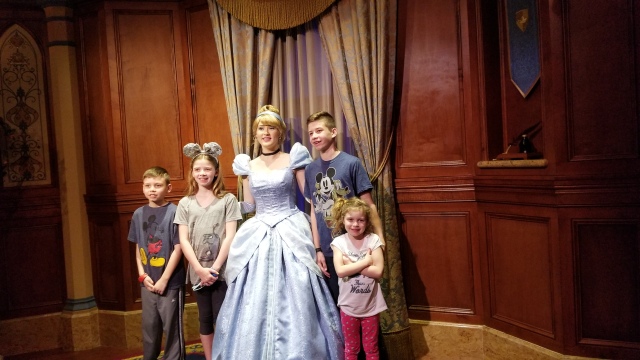 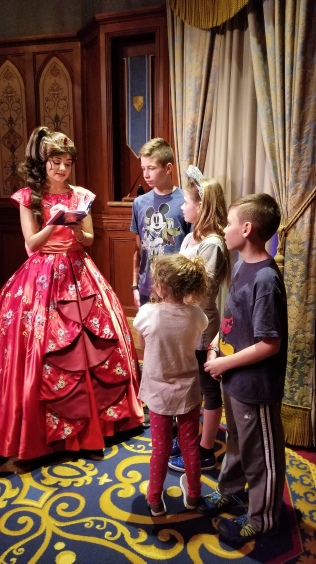 While all the little kids napped, we checked out Tom Sawyer Island and Swiss Family Robinson Treehouse. We also read both of these chapter books as a family before our trip.

We liked both books, but the older kids liked Swiss Family Robinson the best. They have their own secret “home” in the woods on our farm that they visit very frequently. All of the things they have made for their outdoor home are amazing. They even have it divided into rooms and have made a broom from evergreen leaves and a large stick. Kids need to be creative, and they will be if we give them the chance. 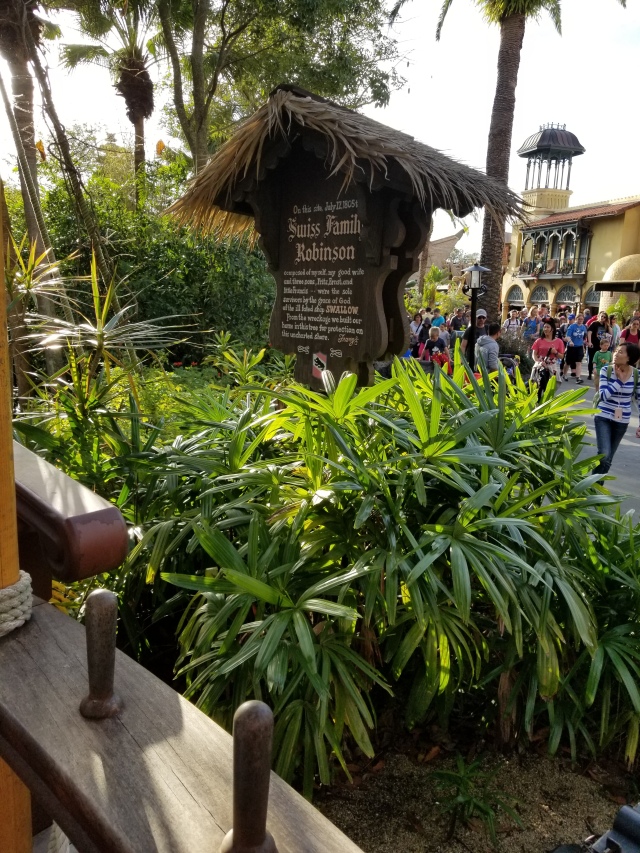 My oldest two kids would choose to live this way everyday if they could. They love the outdoors and adventures. I know they got more ideas for their “house” by seeing this one. 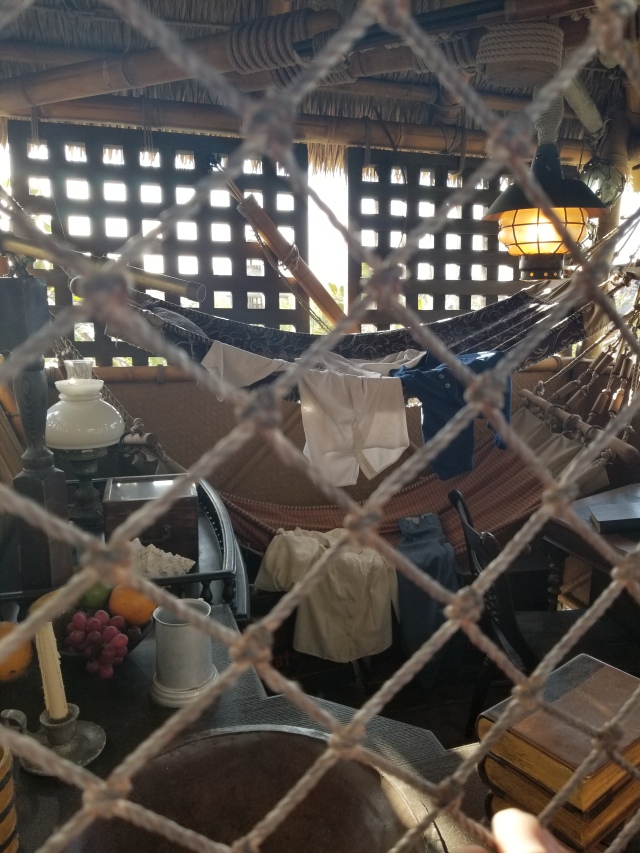 Next, Jaden and I hopped on the Magic Carpet ride. Her favorite characters are Jasmine and Aladdin. The silly camel spit water directly in my face. So, if you ever ride this ride, be aware. We hadn’t ever ridden it before. It was fun though! 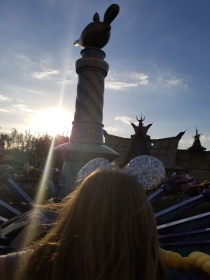 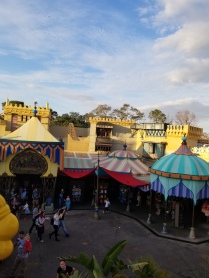 Fantasyland was our last stop for rides at the end of the day. We rode Seven Dwarfs Mine Train, It’s A Small World, Winnie the Pooh, and Peter Pan’s Flight. Jayla’s favorite was Peter Pan. Jayce loved It’s a Small World, and AJ really liked the Winnie the Pooh ride. All of us “older” kids chose the mine train for our favorite. But, they all were great fun rides! 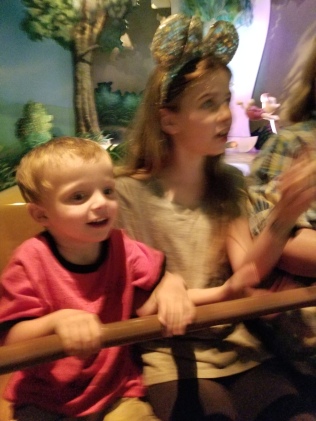 (We read the first Winnie The Pooh chapter book in January, too. It was actually included as a read aloud in our Sonlight curriculum. All the kids were eager to explore Winnie the Pooh’s house and ride the ride. We plan on reading the second chapter book when we return home.)

(My phone was about to lose charge, so I didn’t get good pictures on Peter Pan.)

By the time we finished the rides in Fantasyland, it was time for the fireworks. We grabbed a bite to eat at Tomorrowland Terrace Restaurant and watched them from the back side of the castle. It was a great spot to be away from the crowds.

All in all we had a very busy but magical day!

(Pre-teens and teens really do love Disney, too. This has been a great trip for our oldest two. So, if you think your kids are too old, they aren’t! They will have a wonderful time!)

Notes: If you really want to experience everything in Magic Kingdom have a plan in place before you enter the park! We used touringplans.com. Also, you need at least two full days or you could spread it out over 3 days. That means you need to stay at least 6 days because you will want to visit the other parks, too. There were several rides and places we didn’t even make it to. All three youngest took at least a 2 hour nap in the middle of the day. So, if you are traveling with smaller kids, keep in mind that they will need a break! If I had it to do over again, we would have went to a special Magic Kingdom after hours event and then got park hoppers so we could have visited Magic Kingdom several times before the trip was over. Don’t forget to secure your fast passes at least a month before your trip. They get booked up quickly. Magic Kingdom is not a magical place without them!

Like Loading...
This entry was posted in Let's Reminisce and Reflect! and tagged Disney World, homeschool, Magic Kingdom, Sonlight. Bookmark the permalink.